Cloé Hedger formally pop star Allison Jordan speaks about her relationship with Simon Cowell. What lead her to be a pop star and her life today with International Marriage in Crisis Coach Stephen Hedger… 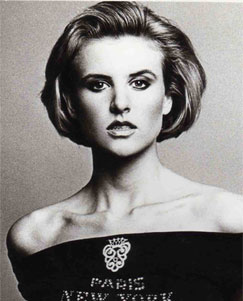 There is so much to tell you, there is so much in my past that had a major effect on how I behaved, what choices I made and how I felt about myself and others. I remember feeling so scared of the world, so untrusting, so confused, nothing made sense.

So I made my own set of safety nets and defense mechanisms to keep me safe. I didn’t even realise that deep in my subconscious the scared little girl and angry teenager in me was running the show. This all changed the day I met Stephen. But first let me tell you about where I have come from.

Born Allison Jordan to spiritualist parents who had been told they would have a girl who would sing dance and be a star.

I was brought up by people who believed the dead were watching over us and helping to guide our lives.

I had no say in that matter.

I was packed off to ballet lessons at 4 and by 9 I was already attending the Saturday drama school. Through the years of practising singing I learn’t I had a voice and passed the audition into the famous Sylvia Young’s Theatre School full time which meant travelling from Sydenham in South London to Marylebone in London every day on the trains by myself. I was 12.

I ended up attending 2 more top theatre schools up until my parents’ divorce.

I spent my childhood learning to sing, dance and act. I realise now that I had enjoyed the drama and singing as it was the only place I had to escape from the madness that was all around me at home.

I had wet the bed until I was 15 because I was so scared my parents would kill each other fighting at 3in the morning, or that the ghosts would show themselves to me.

BBC’s That’s Life was searching for a star

Fast forward to me at 19 years old where I saw an ad in The Stage Newspaper the BBC Show “That’s Life” presented by Ester Rantzen were searching for a star and were looking for the next Sheena Easton.

I didn’t want to go and ignored the ad but my father saw it and there I was 5am standing in a queue of 2000 other auditionees in the cold January morning outside the Hammersmith Apollo.

Whoever won would win a recording contract worth 5 albums with Arista BMG the producers would be Nigel Wright and Simon Cowell. I won.

My single “The Boy From New York City” charted at 21. You could say I was the first pop idol / x factor winner.

He was the one to tell of our relationship and did that in not a very nice way in his book Sweet Revenge: The Intimate Life of Simon Cowell. He was another person I thought I could trust and depend upon who let me down.

Fast forward to today with my relationship with Stephen.

Before I met Stephen something in my life felt wrong something in me knew that everything that I had been told and was doing was not right for me, but I couldn’t put my finger on it.

Stephen showed me how to reconnect to the true version of me. He has shared with me how to translate what others are really saying to me and how to love myself through giving love unconditionally.

Through a technique that Stephen uses he was able to connect me to my true core and that is the one I call Cloé. I connected with that version of me so much that I decided to change my name by deed poll to Cloé.

It was one of the best decisions I have ever made. Some thought I was crazy, but through the official change in name I am able to constantly live in the version of me that is the most centered…that is the true me.

Being the wife of a relationship coach has its good points, but it also has its bad points.

You see once Stephen analyses you, he then knows all your cards so to speak, that’s the down side of being married to a relationship coach, or is it!

Laughter in our relationship is huge. We are always laughing.

It’s not all about Stephen being knowledgeable that makes our relationship work. I have to work at it too. Although I have to say without what he has shared with me I don’t know that I could have helped our relationship.

All I knew was if there was trouble I was to run away, end it by threatening divorce, or sleep the day away. So with the skills I now have, and they are skills that everyone should have, I am able to work with my husband through testing times in our relationship.

Stephen has taken me on a journey to understand me, finding Cloé has enabled me to see what I want from a relationship, how I want to feel.

I wanted to feel feminine, strong, yet soft, sexy, safe, loved, adored, valued, sometimes a little vulnerable. Peaceful, happy and free. Free to be me. To be allowed to explore the world and never be judged and only loved.

Stephen makes me feel all this and more.

So what is the purpose of this post? To say that I think no matter how turbulent ones past or current situation is, things can change, life and how we travel through it can be what we choose it to be.

As long as we are open to other ways of looking at things. In other words be open to learning something different to what we have been told already.

Sometimes I have thought Stephen was talking absolute craziness then I learned to listen until he had finished what he was doing and then it made sense.

Yet I still only took from it what I felt fitted for me, still today I will question something I am unsure of, in the end, all the pieces fit together and the complete picture becomes clear.

And you start to feel you know who you are. I had lost who I was, in fact, I don’t think I ever knew who I was, and I was hidden underneath years of trauma.

I am still on my journey, learning new things about myself and growing all the time. I hope my story will inspire you to find you and that you will visit Stephen if you need his help.

Join over 30,000 subscribers who have looked for insights into intimate relationships why they work and why they don't. Weekly posts join now.....

Do You Want
To Save Your Marriage?

Hi, I'm Stephen Hedger. I'm determined to help couples discover what their marriage is capable of with the right information. My only question is, will it be yours?

Stephen Hedger is known as the most sought after marriage in crisis specialist in the UK. He is famous for consistently and naturally saving many marriages from divorce. He is a favourite of business leaders, business owners, Judges and celebrities.

Stephen runs his meetings from his office in Harley Street London and supports his global clients over Zoom.

A 30 minute call with Stephen

In a short phone conversation, Stephen was able to quickly get to the heart of what the real issue was in our marriage – and why in almost a year of working on our marriage including 10 weeks of marriage counselling through a relationship therapy organisation, we weren’t really making any progress. I found Stephen to be extremely perceptive, as well as empathetic to our situation, while being able to quickly pinpoint the real sticking point in our marriage.
Many thanks
Olivia

Dear Stephen
Thank you for your time to listen to my experience in my marriage. You gave me encouragement to speak out to my partner in confidence. You made me realise that sometimes the way we make comments on each other can aggravate the situation and make it worse. Your advice made me feel revived.

I’m working with this lady, and during the session, she wanted to comment on a testimonial another client had left. As you go through today post, you will see what she wanted to say. Before you get to her words, I want to set the context. I’m not quoting her word for word here, but […]

‘Initially I went to Stephen with a sole focus on saving my marriage as my husband wanted a divorce whilst I felt I could not let go of the 14 years’ relationship without giving it a second chance. My husband was determined to exit and refused to join the Marriage Breakthrough Programme with me, therefore […]

“I went to see Stephen when my relationship was at breaking point. The final trigger was my partner’s plan to sell his property and move in with me. We had until then a long-distance relationship and never spent more than about a month together (thanks to the COVID lockdown). I had finally moved to his […]

When relationships go wrong the pain can be unbelievable. Today’s post is about a couple whose relationship was quickly out of control and both people thought it was the end. When I first agreed to meet this couple she arrived first.  She was clearly very anxious, eyes darting, wringing hands, unsure if her husband would […]

Do you want
To Save your Marriage?

Hi, I'm Stephen Hedger. I'm determined to help couples discover what their marriage is capable of with the right information. My only question is, will it be yours?